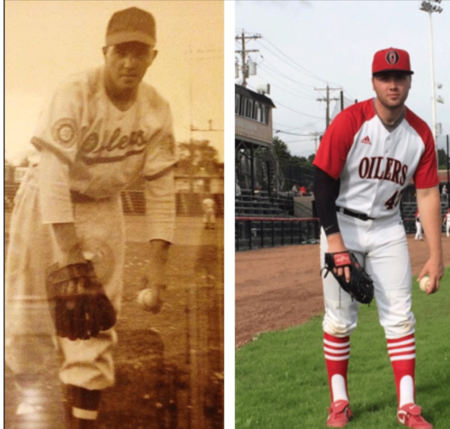 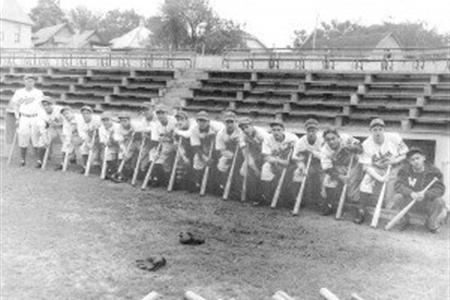 Joe Nicolace (right), a current pitcher on the Olean Oilers, recreates a pose from a photo of his grandfather Jim Anderson, who pitched for the Oilers in the 1950s.

The Nichols College junior was all set to play in a different summer developmental baseball league - one closer to his hometown of Cranston, R.I. – when, at the last minute, the spot was no longer available.

With that news, he reconvened with his college coach, Nick Puccio, to try to find a new destination. Working the phones, Puccio got in touch with somebody in the New York Collegiate Baseball League and eventually was able to get Nicolace a spot on the circuit’s Olean team.

With his plans now firmly in place, Nicolace called his mother to tell her that Coach Puccio had set up him up with an NYCBL team in Olean. Their nickname was the Oilers.

“She paused for a second and said, ‘What?’” the 6-foot, 215-pound lefthander recalled his mother saying. “She said, ‘Joe, that’s the team that my father played for.’”

JAMES “JIM” Anderson arrived in Olean in the summer of 1950.

A hard-throwing left-hander, he was drafted by the New York Yankees out of La Salle High School in Providence, R.I., where he was teammates with eventual Red Sox general manager Lou Gorman.

“My grandfather was known as the Portly Portsider,” Nicolace said after a recent Oilers game, “because he was a 5-foot-8, 190-pound meat cutter. Stocky. And he was known for his fastball.”

Following high school, he chose to work rather than sign with the Yankees. But, seeing the opportunity to both play ball and earn money for his family, he ultimately inked a deal with Cincinnati, which assigned him to their Class D affiliate, the Olean Oilers, in the Pennsylvania-Ontario-New York league.

“He was either going to work or play ball,” Nicolace said. “His family was poor, so he came here to make some money. That’s why he signed.”

Anderson played two seasons in Olean, and at Bradner Stadium, the first of which saw him split time with a team in Lockport. He had a relatively tough go of it as first-year player at age 20, but fared very well in his second season, going 10-4 with a 3.70 ERA.

HIS NAME was a regular in The Times Herald sports pages throughout that summer of ‘51.

On Wednesday, July 25 – nearly 64 years ago to the day – he had a complete-game 10-strikeout performance to key Olean to victory. He also went 3-for-4 with two runs scored. That day, he hit behind catcher Carroll Anstaett, a prominent name in the community today, especially through his ties to baseball.

In the Monday, Aug. 13 edition, PONY league leaders were listed. At that point, Anderson had the sixth best winning percentage in the circuit with an 8-2 record.

All the while, according to Jim Anderson Jr., the Portly Portsider was a “gentleman.”

“One of the stories that I remember someone telling me,” recalled Anderson Jr., whose father died when he was just four-and-a-half years old, “I don’t know if it was in Olean, but it was when he was in the minors: They wanted him to throw at somebody and not be gun-shy.

“Obviously in baseball back then, if you threw at somebody, you threw at them. He was a little gun-shy about throwing at them so he would hit them in the (butt).”

Anderson Sr. played two more seasons in the minors, for affiliates of the Yankees and Philadelphia Phillies, before a torn rotator cuff suffered on a wet field effectively ended his professional career.

He came back to participate in a prestigious amateur league in Rhode Island and took part in the popular Brooklyn vs. The World competition before settling into a non-baseball routine. His times with the Oilers were among his most memorable, because it was the first true shot he was given as a pro.

OBVIOUSLY, Nicolace never knew his grandfather, who was born in 1930 and would be 85 today.

But he’d hear stories about him from both his uncle and his parents growing up – about that 10-4 record, about the time he shared a room with Mickey Mantle, about finishing third in the Brooklyn vs. The World all-star competition.

And now, as a member of the collegiate league Oilers, who also play their games at Bradner Stadium, he has experienced a deeper connection with Anderson than he ever thought possible.

“I’M VERY lucky to have the opportunity to wear the same uniform and play on the same field that he once did,” said Nicolace, currently 3-1 with a 4.50 ERA in 10 appearances for Olean, counting Saturday night. “It’s a crazy feeling.”

Anderson Jr., a one-time capable lefty himself, who remembers getting that first baseball glove from his dad, couldn’t believe it when he found out his nephew was going to be playing in the same town, under the same name, his father had 64 years ago.

“As soon as my sister mentioned it, I said, ‘That’s the team that Daddy played for,’” said Anderson, who now resides outside of Worcester, Mass. “It was unbelievable. It was almost eerie, but it’s great.

“I have memories of my father; obviously Joseph doesn’t have any memories of him other than what I’ve passed on about my dad, articles that I’ve shared with him. For him to basically be on the same mound as his grandfather at one time, I think, is a dream come true for our family, for Joseph.”

Anderson Jr. added: “He gets to share something with a man who, unfortunately, he didn’t get to meet, but he’s probably got all the talent my father had. So for the family, it’s a wonderful experience just for him to be able to have and to be able to share with his grandfather.”

WHEN HE originally agreed to come to Olean to play for coach Bobby Bell’s team, Nicolace had no idea the link he was making.

But he loves that it happened the way it did.

He loved the idea of doing the side-by-side photo, in which he and his grandfather are both wearing jerseys that say “Oilers” on them, both in old-time pitcher’s poses.

And he loves the sport, just as Anderson Sr. had.

Nicolace is going to be a senior at Nichols College in the fall. His dream is that maybe he, too, can one day be a pro.

“I always hope for the best,” he said. “If I can go and play some type of pro ball, that would be awesome. If I doesn’t happen, I want to stay in baseball. I always want to be around the game.”

The Olean Oilers were originally a minor league baseball team that played in the New York-Pennsylvania League from 1939-1951 and from 1955-1958.  During 1939-1956 the Oilers played in the Pennsylvania-Ontario-New York League.  The minor league team was affiliated with the Brooklyn Dodgers, the St. Louis Browns and the Philadephia Phillies.

In 2012 the Olean Oilers team was reinvented, however this time as a collegiate, wood bat development team with the NYCBL (New York Collegiate Baseball League) which is affiliated with Major League Baseball.  Brian and Rene O'Connell moved the Olean Oilers to their historical home at Bradner Stadium in 2014.  The Olean Oilers won back to back NYCBL championships in 2015 and 2016 with manager Bobby Bell at the helm.  The Oilers routinely draw enormous crowds and continue to lead the NYCBL in attendance.